Excerpts from:
SEVEN STEPS TO SOUL

A Poetic Journey of
Spiritual Transformation

THE SIXTH STEP
Imagination ~ The Joining of Worlds

Imagination is that portion of us that is childlike. It isn’t real. Or is it? Could it be that our imagination is a powerful tool that we can use to mold our dreams into a future ~ into a NOW? If we can take the risk and enter the unknown, we may find that we are so important that our imagination is the thread that ties us to our Soul and hence, to all of life. Through our imagination, we can create a portal between our outer world and the rich inner worlds of Soul where everything is possible ~ if only we can imagine. And, we are our own gatekeepers.

She saw the sixth stair before her on a stairway that disappeared into the clouds. She knew this stairway well for it lived in her imagination and led to her inner universe on the “other side”. She had kept this passageway a secret so that the pain and fear of her outer life could not invade her inner sanctuary. Now, the clouds were thinning and a light shone down the stairway beckoning her to join these worlds. Could she allow her inner Self to shine in her mundane life just as the light shone through the clouds?
She would have to climb the stairs to find the answer.

THE SIXTH CHAKRA AND IMAGINATION

On the outside is the reality of our physical life, but on the other side is our imagination. Our imagination is our magic carpet upon which we can ride to find the many selves that were lost when we forgot our SELF.

The other side of worldly woe

A very special space to go
To feel the heart, the mind, the wings
To see the wondrous truth of things

Neither within space nor time
Comes this universe sublime

Not to earn, to own, to keep
But to BE that which you reap

Oh, to touch from inside out
To realize the truth about

Free of want and free forever
Shall I forget, oh please be never

VISITING THE OTHER SIDE

Take a long moment now to visit the other side. To step across this threshold, we must shed all our protective armor and enter as innocent as a child. When we return, we may not need such armor for we will have learned that our protection comes from within.

Moments in the meadow,
moments by the pond.
Moments of a life gone by
to set the sun upon.
When were all these moments?
Wherever did they go?
For lives of stress and worry,
what is there now to show?

Maybe there’s a moment,
one which has not passed.
A special time of laughter
that shall forever last.

That “now” is dawning in the east.
The rays show round the bend.
For all of life to feel the light
and blessings it may send.

For hidden in the moments
is the “now” that lasts forever.
A peace of mind and change of heart
that stress, nor fear, can sever.

To hold that light of hope
forever near the heart,
is to make a seal, a contract,
which no one else can part.

And now, just what will happen?
Now that it has started.
That which has been shut so tight,
with Truth, it can be parted.

The puzzle is together.
The secret, it is out.
The password has been spoken,
in a whisper, not a shout.

The joining of our worlds,
the ones inside and out,
bringing spirit into matter
is what life’s all about.

With head high in the heavens
and feet deep in the earth,
we face a new beginning,
a cycle in rebirth.

Beyond all of the reasons,
the limits and the time,
with awareness of our battles,
our strife and our long climb.

The climb up to the top
of that which has been sought.
The making of our mountains
through feelings and through thought.

And where are these steep mountains,
we have worked so hard to make?
These symbols upon which
we have placed such high a stake.

These mountains they are made
from the inside to the out.
And, of this simple fact
we must never have a doubt.

For deep inside our Self
our Spirit shows the way
so all the moments can unite
to make a bright new day.

Memories now of moments.
A life gone by with JOY.
To know the truth and love of life
that nothing can destroy.

How do we join our inner and outer worlds? Our imagination has shown us another reality and now we must find a way to integrate it into our everyday life. Perhaps the two worlds are not as different as we think. 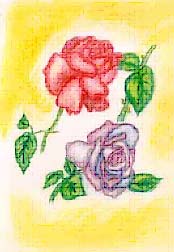 From the outside of the Rose, from the petals which were exposed to the environment, we prayed to the Sacred Center. Some of us even thought that this Sacred Center was deep inside the earth or far above us in the sky.

God was distant and apart from us then, and the world was cruel and distrustful. Therefore, we had to be sure that we protected ourselves from outside forces that we believed were “separate.” If God was separate, than so must everything else be separate. We were lonely. We were isolated. Fortunately, when we felt safe enough on the “outside,” some of us decided to go “inside” to see what lay within the Center of the Rose.

But gradually, we discovered that we were not alone inside the Rose. We came to realize that there was an entire universe which existed there. It was our own special, independent universe. But was it really just ours? Was it really independent? Eventually, we became aware that, from the Center of the Rose, from the center of this “new” universe, you could contact the essence of every other Rose that ever was or ever would be.

And then it began to happen.
There was a great change on the outside of the Rose. It occurred slowly at first, and then the pace grew faster and faster. Everything that had been so hard, and firm, and stable was beginning to shift. Things were not so hard anymore, nor were they so stable. The outside petals of the Rose were moving away from the Core and pulling the other petals with them.

We could not stop the petals from falling. And if we became attached to them, We, too, would fall away from our Core. Now we ALL had to journey to the Center of the Rose and place our consciousness inside because the changes outside were happening faster and faster.

But we were safe deep within ourselves. We were no longer alone there. We were with everyone else who had found their way to the Center of their Core, the Core of their Rose. But were we protected from the outside? Could we hide from what was happening outside of us?

And then, all the petals were gone. We were no longer IN the Center. We WERE the Center itself. There was no longer a place to hide, nor was there a reason because there was NO separation.

As we looked around us, we could see that there were still Roses that appeared to be independent from us. However, when we placed our attention upon them, they lovingly and willingly opened their heart to us, as we did to them.

There were no secrets,
there was no fear,
there was only Unity and Love.

LIVING IN BOTH WORLDS

Once we have joined our inner and outer worlds, we need to find a way to live in them both. However, we may not have to “try” or “work” towards that end. It could be that living in both worlds is as simple as taking one more step.

Upon this distant shore

was all that you have longed for,
all that you could be.
You looked back one last time
before you touched the
earth of your newest creation.

All of your life you had kept it far away
like a dream or a lonely memory.

From your position at the helm of your ship
you could see gentle waves
caressing the once distant shore.

But now, the distance was no more.
You had arrived.

All you had to do was plant your step
where you have always longed to be.

Could you release the vessel
that had carried you this far?

Could you allow it to return to its Source
and await your new vessel?

The sun was warm
when you decided to take the step.

The water was cool
as it tickled your ankles
and the wet sand squished
between your naked toes.

As you walked onto the dry sand
you shed all of your clothes.

They no longer fit you.

and you did not need
to hide inside of it.

Your were totally vulnerable now.
Only the Truth could protect you.

Soon the sun would be setting
and you would face the darkness.

You had only the light
within your heart
to show the way.

But you felt good.
You felt safe.
You were ready.

Maybe not for everything,
but ready for what was next.

The wait was over!
Tomorrow was now!

Continue to: The Sixth Step to Soul