Keepers of the 5D Threshold ~ The Golden Ones 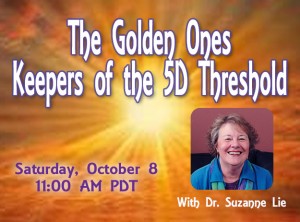 The Golden Ones are ready and prepared to speak to representatives wearing an Earth vessel.
*
Join us as we gain a greater understanding of the significance and messages of the Keepers of the 5D Threshold.

THE GOLDEN ONES Through Suzanne Lie 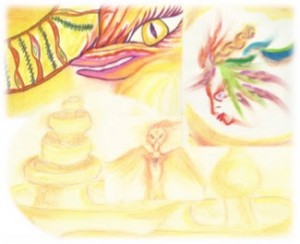 That person is the “you” that calls to us, listens to us, and does whatever you believe you received from us. We want you to know that if you believe that you receive something from us, you are correct.

A “Personal Light Receptor” is something that every single human has—even the Illuminati. Everyone has it. However, like all receptors, it needs to be plugged in and turned on, and this is what many people do not do. when you plug in your Personal Light Receptor into your Pineal Gland, what you are actually doing is saying “I am ready for active duty.” You are saying that,

“I am ready to receive my orders,

and to fulfill those orders to the greatest of my ability within that NOW.”

We would like to thank you for the many lifetimes of receiving our orders. On the other hand, for many, many years, you were unable to document those receptions because you wondered, “How could these message be important?” you asked. These messages were just for you, and you weren’t important, so who cared?

But then, finally, when, you were taking a class and you had to write a journal of your family life. Then you realized that when you write something down, it is greatly clarified. Then you can more easily and thoroughly understand the meaning, or meanings, of the message. Then, you could, also, understand more about your self.

When you more deeply understood your own self, you were ready to meet a higher frequency version of your SELF. You saw that when your higher frequency of SELF, he/she began to speak with you, and finally, you wrote it down.

When you documented what you believed you were receiving via your computer or via paper and pen, it grounded your interdimensional message into the body of Earth. Also, when you take the “time” to “write it down,” you have volunteered to accept that information as real.

Then, when you volunteered to accept that information as “real,” your entire self- esteem began to change. Whereas when you were young and you had your many experiences of communicating with many beings, you didn’t really think it was real.

“After all,” you thought, “how could I be important enough to speak to higher beings?” You could speak to your cats and your dogs, or to unseen beings, but you couldn’t really talk to someone who was really important because you were not important.

Now, do you see how it is very important that you see your SELF as important? In order to fully and completely accept information that resonates to a frequency far beyond that of third dimensional Earth, you need to understand that this information often starts by a sense of desperation.

When you are in a difficult time, and you really need help, your mind can expand to the extent that you can no longer accept the lies and illusions that you had believed for much of your life.

Some of you discovered that not many of the people that you knew, were able to stay with you, while you behaved in such a “weird way.” Thus, many of you felt alone, as you could not tell anyone what was happening with you. But, it is often lonely when you are a leader, and that is what you are.

And, yes indeed you have shared your messages with those who were ready to receive it, and also, with those who had the intention to become awake and aware within your consciousness. Therefore, you are now able to accept what we will tell you about the Golden Circle.

The Golden Circle is actually a circle of “Golden Beings.” These beings are in somewhat of a humanoid form, but you’re not sure because you only see them from about the middle of their backs up to their heads, and you don’t see their faces at all. They see them to be composed of liquid, golden light, which is exactly what they are. Therefore, their form is not static, but shifts and wavers.

We will assist you to hear more of what you have been hearing. You have only heard bits and pieces, and you were always in a situation where you could not write it down or not record it. Therefore this message seemed to be lost to your third dimensional memory.

By the time you find yourself on the edge of this circle, you are just as golden as they are. Then they turn to you and say, “Welcome. Welcome to our Circle.”

All of them speak telepathically, and all of them speak simultaneously in perfect harmony with each other. You know that all of them are speaking because it is much like a spoken choir where each voice represents a slightly different octave. All these octaves merge and blend into a lovely chorus.

Then, the next Golden One also shifts until, eventually, they have spoken on all the higher frequencies. Then, they each go back down to the lower octave, to repeat their journey back up to the highest octave. This occurs because they are practicing moving up within these highest sub-octaves of the fifth dimension.

They, the Golden Ones, make these changes because they want to go down to the threshold of human thinking, human experience, human perception and human sense of self, to better understand how they can assist the human, ascending ones.

The Golden Ones want to help the humans, but their evolution is so much beyond that of humanity that it is difficult for a human to perceive them. Thus, the Golden Ones are ready and prepared to speak to a representative wearing an Earth vessel.

However, the Golden Ones have to wait until that Earth representatives are able to calibrate their consciousness to a frequency in which they can perceive the Golden Ones. Do you remember when you very first started to communicate with higher beings?

When you met the very first being with which you communicated, you had to go through a recalibration process. You had to create your “tunnel of light” through the lower astral plane. In creating your tunnel of light, you forged your own “safe crossing” into the higher dimensions.

Now, when you perceive these Golden Ones, you can hear them speaking about the tunnels of light that they are happy the humans are remembering to create with their unconditional love and multidimensional consciousness.

When the forces that were so cruelly indoctrinated into the Illuminati, as you have called them, think of the tunnel of light, it is quite terrifying to them because they have been programmed to believe that that golden light would END their reality. Then, when you look at the Golden Ones, you can see the many, many souls that are surrounding the Golden Circle.

As you expand your vision out to the furthest edges of this vision, you see those who have been indoctrinated into the darkness. You then hear the Golden Ones asking you, “Will you please, walk these edges and send Unconditional Love and Violet Fire to the ones indoctrinated into darkness?”

The Golden Ones are asking you to say to the “lost ones,”

“Your service has been that you have dipped down into the depths of third dimensional despair. Then, when you find your way Home to your true Multidimensional SELF, you greatly assist the Guardians of the Threshold, the Golden Ones.

“Therefore, dear lost ones, we the Golden Ones say to you, “Thank you for your service. Thank you for allowing your energy field to flow into a form of one who would have your dark experiences.

“As we send this Violet Light, we say, “We do not judge you, for many have had lives such as yours, and through our guidance you have been able to:

to love ourselves unconditionally

and to transmute yourselves

from those Lost Ones, lost in the darkness to those moving right into the arms, into the laps, into the thoughts, into the emotions, and into the frequency of Golden Ones, the Threshold Keepers.

“We, the Golden Ones, expand our Golden Circle outwards and downwards into the lower frequencies until — The Golden Circle touches any and all darkness that still resides on our beloved Mother Gaia.”

We, the Golden Ones, ask that humanity assist with the healing of the lost ones, for due to Gaia’s third dimensional operating system of Cause and Effect, the cause of the “dark ones” must be transmuted to allow the effect of clearing all “dark ones” from positions of power-over-others.

Finally, Gaia’s third operating system of “Polarization into Individualization” must be transmuted into “Unity with all life on planet Gaia.”

All of these components of Gaia’s “3D Operating System” need to be mastered before Earth, and all Her inhabitants, can expand into Her fifth dimensional expression. When the members of Ascending Earth ask us, The Golden Ones, to deeply, highly and inter-dimensionally connect Gaia with our Golden Light, the Mastery of:

Gain mastery of the energy that you send out, as it will return back to you!

Remember that whatever you send out into your world will return to you!

Live in Unity Consciousness with ALL life over, around, and within Earth!

THE CONVERSATIONS THAT THE GOLDEN ONES ARE HAVING IN MY HEAD/CONSCIOUSNESS ARE/WERE GETTING INCREASINGLY INTENSE.

I THINK THAT IS WHY THE ARCTURIANS, OR MAYBE THE GOLDEN ONES, DID NOT WANT ME TO DOCUMENT THIS EXPERIENCE, AND I WAS NOT BE ABLE TO DISCUSS THIS FOR A LONG TIME WITH ANYONE WHO COULD UNDERSTAND WHAT I WAS TALKING ABOUT.

“THIS IS WHAT IS JUST STARTING NOW,” THE ARCTURIANS ARE SAYING.

“BUT TIME IS A THIRD-DIMENSIONAL CONCEPT

WHEREAS NOW IS A CONSTANT OF THE FIFTH DIMENSION” 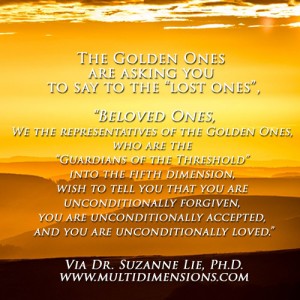 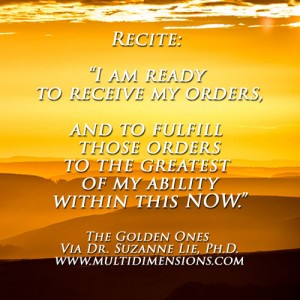 Stay Up to Date!

Donations are graciously accepted to assist with free events, videos, and meditations that we share!