Beloved People of my Body,
I, Gaia, am ascending. I invite you ALL to join me in this transition. Although more and more of you are aware that we, as a planet, are ascending, the Collective Consciousness of Earth is still filled with fear. For this reason, even my “awake” humans continue to battle fear and doubt. I wish to remind you now that you can release this battle, for your greatest desire is coming to pass in this very moment. We are ALL returning to our SELF. I AM a Star and YOU ARE the Elohim and Angels who inhabit me.

Since you have just come from the cleansing Violet Fire, as well as a stay in the Integration Chamber of the Violet Temple, your battle with fear is largely won. I am here now to assist you in recalibrating your physical body. Then, the higher energy you have just downloaded into your consciousness will be more accessible in your daily, physical life. However, first I would like to share a bit of my history, so that you may remember yours as well.

Once, millennia ago, I was a “child,” a small planet born to the Star named Sol. Sol and His planets wished to accelerate their evolution by taking third dimensional form and attempting to provide life for myriad third dimensional beings. The desire to participate in this adventure is the reason I chose to move my Essence to this Solar System.

The planets who chose to support third dimensional life knew that this would be a great challenge. The remembrance of SELF while in a third dimensional life can be easily lost in the polarity of fear and evil. Evil is “live” spelled backwards, and polarized life can become caught in the counterclockwise spin of devolution rather than evolution. In fact, one of Sol’s planets, Malduk, was indeed destroyed by “evil.” Mars was also once a beautiful world, but it has now became a vast wasteland. Fortunately, Venus was wise to take on life in only the fifth and higher fourth dimensions so that She could assist her sibling planets, primarily me.

In preparation for our descension into the third dimension, Sol slowly lowered our solar system’s resonance by first entering the fifth dimension. It was there that I, Gaia, first allowed androgynous life to experiment with the concept of taking on form. The Land of Pan was my first civilization, which had some wavering concept of form. After this interaction with the life forms of Pan, my resonance lowered from fifth dimensional to fifth/fourth dimension. My resonance was lowered to the fifth/fourth dimensional because the first seeds of polarity were implanted in the collective consciousness of my beings of Pan. I could not call them humans, as their bodies were very different from the bodies that you now wear. However, the experiences of Pan’s inhabitants allowed me to accustom myself to carrying intelligent life on my body.

Lemuria came next to resonate at the threshold between the fifth and fourth dimension. The Lemurians were my first beings to carry any consistent form that resembled humans. They were, however, androgynous with a strong feminine emanation. Of course, there were many other life forms from other systems and planets that visited me, or even emigrated onto my body. They genetically accelerated the evolution of my peoples, but they also brought strife.

Geographic relocation does not solve problems. Hence, these “off worlders” brought their problems with them, which served to further lower my resonance to the vibration between the fourth and the third dimension. It was these “visitors” who first introduced me to the concept of people with a masculine form. Humans with the polarities of masculine and feminine were the ones who created the Atlantian civilization; and it was the fall of Atlantis which served to lower my resonance into the third dimension.

I nearly suffered the fate of Malduk at that time, but Beloved Venus trained higher beings from all over our Galaxy to incarnate as humans or to “walk into” my humans. Many of you who are reading this message are among these beings. I wish to thank you all for your service and to remind you again that your contract for serving me, which ran from leaving the Taurus Photon Belt to entering the Aquarian Photon Belt, is now ending.

I thank you all for continuing to incarnate on my Earth during this Grand Cycle. As we all ascend, actually bringing the fifth dimension back into our form, some of you will remain on higher dimensional Earth, and others of you will return to your Homeworlds on other planets, galaxies, and dimensions.

I wish to tell you today to release ALL fear. Yes, I am undergoing a great transition, just as you are. Yes, my transition is causing pain and suffering, just as yours is. The transition into Lightbody is not easy for us, as we have held third dimensional forms for millennia. Our 3D genetic coding has been replicating itself all this time, and we are asking it to change itself without upsetting our entire system.

I want you all to know that even though there have been “disasters” on my body, I am NOT angry. I am NOT punishing any of my beings who crossover due to my transition. Remember, what may appear as dying is actually part of the ascension process that we, as ONE being, are experiencing. There are many brave Souls who have volunteered to release their bodies in order to assist with our Ascension. Do not grieve them; instead HONOR them for their great courage. Their sacrifice has pulled the world together into the Oness, which is necessary for the ascension of the ENTIRE planet.

While you are attending to the Spiritual World in your meditations and prayers, please also attend to the transition of our Material World. Take a long moment in your contemplations to peruse your many incarnations on my body. It is through viewing your alternate realities that you shall remember your Mission. You have practiced this Mission in many of your other lives, which are actually happening as parallel realities in the NOW of the ONE.

Each of these third dimensional realities is separated like channels on a radio station. Each reality has a slightly different resonance, a different “bandwidth,” or “call name.” There are many versions of our Ascension, and I know that you wish to experience the one in which we successfully ascend to the fifth dimension and beyond. You will identify this reality by the “call name” of K-LOVE. Love holds the highest vibration, which is the bandwidth that will be able to successfully make the transition.

The bandwidth of FEAR will not transition into the fifth dimension and beyond, as it is based on separation and limitation. Therefore, fear can only resonate to the third, and lower fourth, dimension. I realize that “Flowing above Fear” is a challenge in the face of the many “disasters” that OUR transformation into Lightbody may cause. However, if you can remember your SELF, you will remember that this reality is an illusion, a hologram.

Many of my humans enjoy watching scary movies. They can do so because they know that the “movie” is not real. It is an illusion captured on an electromagnetic strip of film. I wish to remind you once again, your 3D experience IS an illusion captured on an electromagnetic matrix for form. All of us, including myself, Gaia, have myriad forms, as well as myriad formless expressions of our SELF. The beings, human and non-human, who have left the face of my body due to OUR transition are still very much alive in another reality.

PROTECTORS OF THE LAND

Also, while you grieve the loss of your humans, can you also grieve the loss of the animals, the fish, the flowers, the trees? We are all ONE! ALL of my creatures deserve the same concern and respect as humans. Humans are meant to be the protectors of the energy patterns of my landed areas, while the Cetacean species is the protector of my waters. Have you, as humans, fulfilled your promise to respect and protect ALL life on this beautiful planet that WE ARE? Was your consciousness calibrated to receive messages and warnings from the Cetacean family, as was the consciousness of my ancient peoples? I am not judging you, as I know the fear that abounds within my human kingdom. I only wish to remind you that you are NOT victims. Therefore, you do not need to be afraid.

You are the creators of your reality. I encourage each of you to choose to calibrate your resonance to the LOVE channel, so that, together, we can create a transition into Lightbody with a minimum of pain and disaster. I ask each of my humans, the protectors of my landed surface, to harmonize their thoughts, which are form—hence, land, with their emotions, which are energy in motion—hence, water, so that there is no longer dissonance between thoughts and emotions/land and water.

It is YOU who are my Planetary Ascension Team. You have sought to remember your True SELF and downloaded your higher vibrations into your physical form. You have suffered the disharmonies, discomforts and confusions of integrating the frequencies of the fifth dimension and beyond into your third and fourth dimensional bodies. It is because of your great service that we shall ascend. It is because of your Surrender to the Flow that we are now a fourth dimensional planet, ahead of schedule for transformation and the End Game of the 3D Illusion.

I ask all of you who have served me so far to continue with your self reflection, continue harmonizing your thoughts and emotions, continue with clearing and balancing your emotional body and hearing and choosing your every thought. Being a victim to change creates more fear, which creates a violent transition. On the other hand, taking responsibility for the life YOU are creating builds a slow, controlled transition. As you peacefully and calmly transition into Light, you GREATLY assist a peaceful, calm transition for the entire planet.

Surrender to the Flow, for “what you resist—persists.” Allow yourself to be ever conscious of what you think and how you feel. Constantly monitor and modulate your own energy of E-motion—water—and your own thoughts and intentions—land. In that manner you are BEING the Keepers of the Land that you are meant to be. 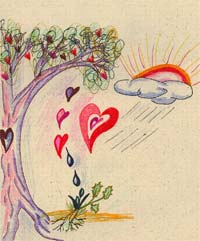 THE PATH OF LOVE

In that way we know
We’re on the right track,
The one of abundance,
And free of all lack

Thoughts of restrictions
And feelings of fear,
We release from our Soul
For the pathway to clear

I THANK YOU FOR YOUR SERVICE,
I AM Gaia

Continue to: A Unified Message