Keepers Of The Water 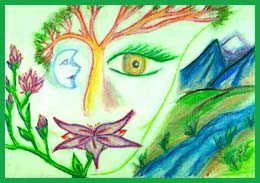 Dear People of my Planet,

Before we return to the Arcturians who will guide you again in “Becoming One,” the Keepers of the Water have a special message they wish to share. Since the Second Chakra rules the element of water, they feel that this would be the best place for them to present their message.
Therefore, I now turn you over to the:

The Keepers of the Water

Dear humans,
We are the cetaceans. Just as you are the Keepers of the Land, we are the Keepers of the Water. We have come to speak with you as we wish to work together with you so that the land and water can resolve their disagreements. As you may know, the weather is created by the collective, thoughts, land, and emotions, water. Whenever your thoughts and emotions are in conflict, it is reflected not only in your personal life but, also, in Gaia’s weather.

As you know, we the guardians of Earth’s water and land have also begun our journey of “in-between.” This is partially why “in-between” the land and water has suffered such damage in the last year. The scientific reasons for the weather extremes are, of course, also correct. However, the scientists are only speaking from the third dimensional perspective. We are asking you to take a moment of your life to look at this process from the fifth dimensional perspective.

We, the cetaceans, can more easily take the fifth dimensional viewpoint because we are more in touch with our multidimensional heritage. We are still able to remember, in fact we never forgot, our fifth/sixth dimensional SELF on Sirius A. We remember when we lived on Earth before the days of Atlantis. We were there when Atlantis fell into the sea, so we are very familiar with the disagreement between land and sea.

The “time” of this entrance is NOW. We are “in-between” the reality of “outside the Belt” and “inside the Belt.” The problem is, just as humans have long suffered a conflict between their thoughts and emotions, and just as humans have been overwhelmed by the fear in Gaia’s aura, so have we. However, trying not to sound arrogant, we must say that our fear is not as strong, nor as toxic, as the fear of humanity.

We will not tell you that the times ahead will be easy, although, there are many ways to make them easier. One of these ways is to find co-operation with the many species of our dear Mother Gaia’s land and water. All the Kingdoms of Earth, Mineral, Plant, Animal, and even the Kingdom of Faerie in the fourth dimension, are on the verge of great transformation. Hence, it is vital that we all work in unity and mutual respect to assist each other in this process.

Humanity, in its great journey from tribal, group consciousness to the extreme of today’s individual consciousness, has done great damage to itself and to the other kingdoms. We plead now, not just for ourselves, but for the rest of the inhabitants of earth, that you humans find a way to rise above your fear and conflict and find a way to live in love.

In this very moment the conflict between the polarities of good/evil, love/fear, life/death, and land/water rages on. We implore you, dear Keepers of the Land to find the balance, the center point, the place “in-between” these polarities. It is from this center point that you ride the wave of Unconditional Love into the Detached Compassion of your fifth/sixth dimensional SELF. In this manner, you can calm your emotions of fear, anger and sorrow, which combined with your destructive thoughts, judgments and accusations, creates greater and greater weather extremes. Once your emotions are calmed, and you have returned to your natural state of love, your thoughts can be constructive, positive and compassionate.

Remember, dear Keepers of the Land, YOU are the weather. YOU are the reality that you have created. We mourn the loss of the many who died and the beauty of the land destroyed. Do you mourn, as well, the loss of our pure waters and our many water inhabitants who died? Can we learn to cooperate, land and water, thoughts and emotions, humans and animals? The Animal and Plant Kingdoms are transforming just as are many humans. The domination of humanity must now transform into the cooperation of humanity with all the other species of Gaia’s body. Additionally, humanity must also learn to cooperate with humanity.

We, the cetaceans, well know the difference between the humans who have sought to murder us and the humans who have sought to protect us. What we are saying now is that humans also need our protection. Just like you, we are highly evolved beings. In fact, many of you have fifth/sixth dimensional portions of your Self living on Sirius A, just as we do. Therefore, we should join forces for the good of all. If we, the most evolved beings on Earth, could work together, imagine how much easier we could make our transition!

This inter-species cooperation, however, must begin with the cooperation of your thoughts and emotions. We understand how difficult it must be for you awakened humans to have compassion for the members of your species who still live by greed, selfishness and “power over” others. We, too, have suffered greatly at their hand. The experiment of third dimensional humanity has been a great victory, as well as a terrible mistake. The Higher SELVS of both our species look upon this adventure with mixed reviews. Much was learned, yet much was lost.

It is “time” now for all of us to find the center point “in-between” learning and losing to discover the neutral point of Detached Compassion. Monitor your every thought to release all judgment and negativity. Constantly listen to the Inner Voice of your Soul/SELF to regain and maintain the mental state of Detached Compassion. Continuously be aware of your every emotion, so that you can release all fear, anger and sorrow to find the center point of Unconditional Love.

Gaia and ALL of Her in habitants are going through the “narrows” that are in-between the polarities of our 3D reality so that we locate the Center Path. We are like mountain climbers climbing between two huge rocks who must reach up to find a strong point to which we can attach our “safety cord.” This point of strength is not only “above,” it is also “in-between” the extremes of polarities, as well as “in-between” the reality that we are leaving and the reality that we are becoming.

Where we are going can only be found with Unconditional Love and Detached Compassion, as well as the Unity of Purpose that can only be attained by Planetary Consciousness. We who are awakened have to embrace the responsibility that accompanies our power-within in order to be the “safe point” to which others can attach their “safety cord.” In this manner, we can set a shining example for others.

Continue to: Becoming One – Second Chakra