I AM IlliaEm, Elohim of Arcturus. As an Elohim I am a “holder of form.” I have come to bestow a great gift upon you. However, first allow me to tell you about the “Force of Creation.” 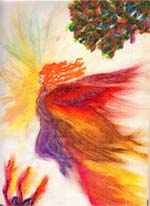 You, and Gaia, have many Elementals within your physical body. These Elementals are “supervised” by their Devas, who are the Group Elemental for their element. These Elementals and Devas assist all 3D Beings in creating and holding their 3D form. Because Gaia, and all her inhabitants, is undergoing the ascension process, all life on Gaia is incrementally rising in vibration. With each small shift in resonance, your form slightly alters. Because of this, the Elementals, Devas and Elohim are now extremely busy.

In fact, your human body, and the planetary body of Gaia, is altering its structure, beginning with its DNA. Therefore, I, IlliaEm, am here to assist you, persons and planet, in your transformation. You see, as you change the resonate frequency of your body, you also shift realities. Therefore, we members of the Devic Kingdom are not only assisting you in holding the form of your earth vessel, but we are also assisting Gaia in holding the form of all forms within and upon Her ever-changing planet.

This shifting of forms and realities is much like climbing a steep mountain cliff. First you reach up as far as you can to place your pylon into the cliff. Then you attach your safety tether to the pylon so that you are connected to something solid as you move up the cliff. Then, when you feel ready, you pull yourself up to the position of the pylon. It is best to remain there for a while, to assure that you are stable, before you repeat the same process, again and again.

This “climb” is precisely what you are doing now. First you reach up in vibration to a higher frequency of your Multidimensional SELF. Then you attach your attention, pylon, to that SELF. When you feel ready, you use your intention, safety tether, to pull your resonance up in vibration until it matches the SELF to whom you have attached.

Just as the mountain climber’s view of the world changes each time a higher pylon is reached, your reality shifts each time you move into a higher frequency of your SELF. Because your body has risen in resonance, you are able to consciously perceive a higher frequency reality. The reality was always there, but it was formerly beyond your ability to perceive it. Once you are able to become aware of a reality, you can also be IN that reality. 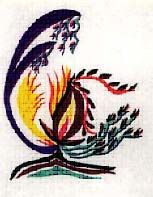 In order to stay conscious in that higher vibration, however, you must maintain your body, and/or consciousness, at that frequency. In other words, you must “hold the form” of your new body, just as the mountain climber must “hold his position” on a higher part of the mountain.

Gradually, you are changing from a third dimensional, to a fourth dimensional, to a fifth dimensional body and reality. You are transforming your “form” from that of carbon, 3D, to etheric, 4D, to Lightbody, 5D. Hence, this transition will often make you feel fatigued. Your alteration is much like that of a “snake” that has outgrown its old skin and must shed it.

Slowly but surely, your old “skin” is being released so that your “new model,” Lightbody, can be revealed. “YOU” will not “die.” In fact, you won’t even appear to be of Light with your physical eyes, as your external shell will maintain the same vibration as the planet, so that you and Gaia may perform your ascension TOGETHER.

You and Gaia are encased in the shell of the “old you.” Inside the shell, you are transforming into Lightbody. You will keep this protective encasement until it is time for you to “crack the shell” in synchronicity with Gaia and all the other members of the grounded Planetary Ascension Team. This cracking of the shell will commence at the “time” when the 3D Matrix begins to so degrade that the points of cohesion loosen.

The 3D Game will begin its “ending” when “enough” of the illusions of separation and limitation are released by the awakening Lightworkers. Every time you say NO to illusion, NO to limitation, and NO to extinct beliefs that separate one from another, the 3D Matrix loosens.

This process will come slowly at first but will steadily gather speed. Unfortunately, due to their fears and indoctrinations from the past, many humans, as well as other members of Gaia’s kingdom, are still living in “survival based” reality. Happily, as each player of the Game Awakens, their first task is to awaken others.

I, IlliaEm, wish to congratulate you on your journey so far. You have now integrated your Soul/SELF into your First, Second, Third, and Fourth Chakras. Please, allow your self “time” to adjust to these changes, as well as to each new reality.

As your lower chakras, one through three, are recalibrated, you experience more and more freedom from living in “survival mode.” This freedom feels like a huge transition in your life.

With the calibration of your Fourth, Heart Chakra, there are more major changes, both in your life and in your body, as you integrate the Unconditional Love of your Soul/SELF. This foundation of Unconditional Love gives you the courage to awaken your own Force of Creation that has been locked in your Throat Chakra.

During the integration of your Throat Chakra, your consciousness will expand to encompass the fifth dimension and your brainwaves will shift from Beta, to Alpha, to Theta. Beta Wave Consciousness will become increasingly tedious, and you will crave the Force of Creation in your everyday life. At this point you will likely feel “out of sync” with members of your previous reality who have not yet awakened their Force of Creation and still believe that they must “work hard to get what they want.”

As your consciousness expands, your body accepts more prana into your chakras, your chakras spin faster due to the increased prana, and deeper levels of darkness are released from your physical form. As age-old darkness is released, the secrets of your alternate realities “past lives” are experienced, often in a vivid fashion. Until these realities are healed and released, life can be quite challenging.

Your physical “shell” becomes thinner and more pliable as your fourth dimensional aura is cleared of old dissonance. It is true that you have already cleared much of your “darkness,” but as you move higher UP in consciousness, you also move deeper DOWN into your unconscious self. Also, due to the alteration of your DNA, you are now clearing old genetic memories that were formerly inaccessible. 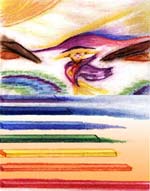 On the other hand, you have only experienced the fifth dimension during very spiritual lifetimes in which you actually “ascended” at the time of your “death.” In your “ascension” in these lifetimes, you were able to consciously cross over into the loving acceptance of your “Spirit Guides.” However, your earth vessel was usually discarded, and a new one was created for your “next” incarnation.

On the other hand, during this era of Planetary Ascension, many of you will keep an earth vessel for your visits to the “old Earth,” so that you may more easily assist the new ascending ones. This will be much like keeping a car at your office, so that you will have transportation while you are at work.

In fact, many of you are having one reality in which you can freely be your SELF and another reality in which you must “keep up the façade” of being ONLY third dimensional. You are doing this so that you can perform your Mission in the “Silence.” Once you have fully integrated your Throat Chakra, you will find it much more difficult to KEEP up your facade, and easier to “come out” into the world as your SELF.

The challenge is that it is difficult enough to successfully and happily live one earth life, and your transformation is creating the experience of simultaneously living many lives. Fortunately, with the integration of the Throat Chakra, you are in Constant Communication with your Multidimensional SELF who is quite familiar with concurrently living in multiple realities. This Constant Communication will guide you, just as, increasingly, you will guide others.

The Constant Communication with your SELF will continuously offer you an antidote for the toxic emotions of the third dimension.

When you feel angry, your SELF will remind you that you can choose to UNDERSTAND.
When you become sad, your SELF will assist you to RELEASE what is “complete” into the Flow.
And, when you experience fear, your SELF will bask you in Unconditional LOVE to give you strength to fulfill the Initiation that YOU have created.

Because you continuously hear the “Voice of your SELF,” and see through the “Eyes of your Soul,” memories from Home constantly distract you from what you “should” be doing and encourage you to, instead, do what you “want” to do.

Eventually, it will become easier for you to remember that you no longer “want” to engage in the dramas of the 3D Game. Since you can now see through many illusions, you are more able to Unconditionally Accept and Unconditionally Forgive the behavior and actions of those who are still trapped in the 3D Matrix.

Please take a moment now to integrate my message. I will return shortly to lead you in the Throat Chakra Mediation.