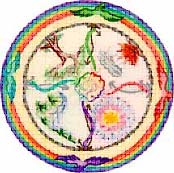 I, IlliaEm, will now lead you in a meditation to integrate your Throat Chakra. Begin your meditation by viewing your self from the viewpoint of your integrated Soul/SELF. Therefore, you see your earth vessel from slightly above your head, as well as within the first four chakras which you have already integrated.

Feel your first four chakras grounded within the shape of a four-sided pyramid. Now, “copy” that pyramid and send the other peak down into the heart of Gaia. Your Throat Chakra is at the peak of the top pyramid, with peak of the bottom pyramid grounded in the Heart of Gaia.

From the perspective of your Throat Chakra at the peak of the top pyramid, view your earth body stretched before you like the form of the Sphinx. Thank your animal Deva for allowing you to visit Earth through its mammalian form, as your SELF can also remember the many forms you hold in other planets, galaxies and dimensions.

Return now to your SELF’S viewpoint just above your head. FEEL your Multidimensional SELF as it enters your earth vessel through your Crown Chakra and goes into the Temple of your Third Eye. From the Temple of your Third Eye, you can look down to see your Throat Chakra. From this perspective, your Throat Chakra appears as a butterfly-shaped relay station. Within this relay station, all communications from all “planes” are received and translated into a “language” which your human brain can understand and communicate.

Breathe the Essence of your Multidimensional SELF into the relay station of your Throat Chakra to encourage all multidimensional communications to proceed clearly and understandably. See how each message is a seed which has the potential to be a creation.

Now, once again, center your perception on your Throat Chakra at the peak of the top pyramid. Feel the grounding of the inverted pyramid below you, supporting your process.

Once in your Fifth Chakra, allow both personal and planetary emotional wounds to bask in the light of the higher frequencies.

Now, using the “tone” of your voice, you will exhale through your mouth, to release these ancient, painful feelings.

As you inhale each wounded emotion, it will move UP

YOU ARE READY TO BEGIN

You have transmuted your wounded emotions of:

You may now use these transformed emotions as building materials for the matrix of the New Earth that YOU are creating. Imagine each emotion as the color and tone that it projects and weave them into your hologram to manifest the beautiful reality you deserve.

But wait; is there a virus in your hologram? Yes, there it is, an ancient emotion, long buried in your Second Chakra that is interfering with your creative force.

In this manner, you can transmute your “feeling of limitation” into the “force of desire.”
And now my Beloveds, it is time for me to bestow my gift upon you. Because you have integrated your Soul/SELF into your Fifth Chakra, you have regained your personal Force of Creation. Therefore, I give you:

The Crown of the Elohim 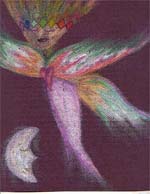 With the activation of your Force of Creation within your Throat Chakra, you are not only ONE with the planet, YOU are also ONE with the Elohim who have creative powers far beyond any human abilities. These Powers are inside of you and you are inside of them.

When your mind can visualize that concept, you will have released an important hook of the 3D Matrix, for when you are inside of that which is also inside of you, there are NO boundaries, NO limits, and you know that:

“I AM the Heart and Soul of Creativity. Therefore, I AM Elohim.”
It is time now, Beloved, to take your Crown of the Elohim. Be still, while I place the Crown upon your noble head.

This Crown is a vital key to creating your New Reality/ New Earth. The Crown of the Elohim has seven jewels which are synchronized to your seven human chakras. On your left temple is the red jewel, in the center of your forehead is the green jewel, and the violet jewel is on your right temple. FEEL your Crown of the Elohim on your head, and I will lead you in activating it.

When you first went through the 3D Matrix, you separated your ONE White Light into the seven octaves of the third dimension. By activating your Crown, you will free yourself from the “net” of the 3D Matrix, and activate your Elohim, Creator SELF while you still hold a form in the physical reality.

FEELING your Crown placed firmly around your brow, you will activate each jewel by chanting “E—LO—HIM,” (‘eh’ ‘low’ ‘him’) while focusing your attention on each Jewel of Creativity, as well as the correlate chakra ruled by that color. You will chant “E—LO—HIM,” seven times.

When the Higher Light enters the prism of the 3D Matrix, it splits into seven colors. As you chant, the power of the “sound” of your voice, joined with your focus and intention, will program each jewel to release illusion from the area of the 3D Matrix ruled by that Chakra. As the illusions of each jewel and correlate areas of your life are released, the Creative Powers of that jewel expand into the fifth dimension of “instant manifestation,” as well as into the White Light of the ONE.

Each jewel is actually a portal for inter-dimensional travel, as well as an open door through which the higher frequencies of light can enter the physical plane. You, the wearer of the Crown, will be the Guardian for these portals. You will begin with the First Chakra and the Red Jewel on your left.

You are now a Portal for Multidimensional Strength and Vitality!

You are now a Portal for Multidimensional Calm and Balance!

You are now a Portal for Multidimensional Power and Wisdom!

FOURTH CHAKRA, heart, correlates to Green Jewel, at the right of the Yellow Jewel.
SEE the color GREEN, FEEL your Heart Chakra, TONE the middle, resonant note of your vocal range. This tone is your “keynote,” the sound of your “signature frequency.”

You are now a Portal for Multidimensional, Unconditional Love and Detached Compassion!

FIFTH CHAKRA, throat, correlates to the Blue Jewel, at the right of the Green Jewel.
SEE the color BLUE, FEEL your Throat Chakra, TONE the next tone up your vocal range.
As you tone E—LO—HIM to this Jewel/Chakra, release into the Light of the ONE ALL illusions of miscommunications, lies, and creative limitations.
Release ALL fear of judgment and insecurities about expressing your SELF in ANY 3D/4D lifetime to the Light of the ONE to see through the Eyes of Soul, hear the Voice of SELF and create from your Highest Intention.

You are now a Portal for Multidimensional Creativity and Communication!

SIXTH CHAKRA, brow, correlates to Indigo Jewel, at the right of the Blue Jewel.
SEE the color INDIGO, FEEL your Brow Chakra, TONE the next note up your vocal range.
As you tone E—LO—HIM to this Jewel/Chakra, release into the Light of the ONE ALL illusions that fog the fulfillment of goals or your clarity of Multidimensional Vision.

Release into the Light of the ONE ALL Doubt of your MASTERY in ANY 3D/4D lifetime to FULFILL your greatest goals and participate in Planetary Ascension.

You are now a Portal for Guidance and Fulfillment!

You are now a Portal for Personal and Planetary Ascension!

Judge yourselves no more, my Ones. You are PERFECT, for you are DIVINE. Live within the Flow of Divine Timing. Do not “try hard” or force your manifestations, for that is of the old pattern. Instead, be clear about what you wish to manifest, and KNOW your SELF so that you can truthfully state your intentions. 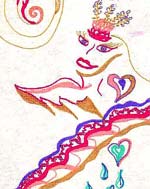 After stating your Intention, simply open your heart to expect the fulfillment of what is already yours. When your personal vibration perfectly matches the resonance of your intention, your desire will give birth to REALITY.

In closing, I wish to remind you to KNOW what is in your Heart and release ALL resistance and effort.
BELIEVE – ACCEPT – ALLOW!
Your reality is a blank canvas, an empty page.

Continue to: Becoming One – Fifth Chakra