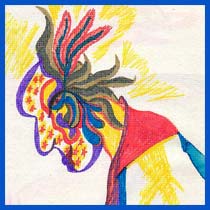 A small, yet steady, inner voice says, “I AM within.” This voice, which was once UP, is now WITHIN. You may feel your confused ego self on the sidelines of your awareness. It did not die. It was just re-assigned. Ego, who was once YOU, is now IT. It is the mechanic, the chief engineer in charge of biological functions, but it is NOT “you.”

You are Soul. Once you were an ego who had a Soul. Now you are a Soul who has an ego. Inside your SELF you have climbed a stair, moved into a new home, become a new “person.” But, of course, you are no longer a person who has a Soul. You are a Soul who has a person. Before, you would look UP from your ego to connect with your Soul. Your “one” ego would look UP to your “one” Soul. Now, when you look UP, you are Soul looking UP to connect with your Oversoul. Your “one” Soul within looks UP to see your “many” Souls within your Oversoul. Furthermore, the “UP” is now “IN.”

All of this, which once felt far, far above you, now feels deep, deep within you. Your “SELF” now feels much like a stadium. This stadium is filled to the top with fragments of your SELF that are, indeed, “YOU.” You are also the stadium, as well as the entire audience watching the game being played, by more fragments of YOU, on the floor of the stadium.

Feel a point of focus that is the perspective of one of the many that is “You,” this Grounding Point. This “You” is sitting at the top of the stadium looking down on the game. You feel the illumination of the immense lights, just overhead, that light your stadium. Yes, you are the lights as well. The lights are the YOU who is completely impersonal, non-human. They are still “above” YOU, but only because you have not left the stadium.

If you were to become one of those lights, or perhaps all of the lights, you too would become non-human. You would be Light; in fact, you would become Lightbody. Just as you are now Soul inside with your human outside, when you become the “lights” you will be Soul outside and human inside. The “I” that once was “YOU” would become the “WE,” as your Lightbody no longer lives with the illusion of separation. Hence, your “I” would be “WE.”

You now feel the yearning to become the lights. You feel an inner tug to be aware of your humanness as a part of your SELF rather than your SELF as a part of your humanness. But, if you did, could you return to the stadium? Could you enjoy the game that all the “yous” are so busily cheering for? There are two teams down there, the BAD team in the dark uniforms and the GOOD team in the light uniforms.

You understand that the teams wear uniforms so that the audience can tell the difference between the teams. They also wear uniforms so that each team member can tell who is on “their” team and who is on the “other” team. Otherwise, a “good” guy might assist a “bad” guy, or a “bad’ guy might assist a “good” guy. What if they all had the same uniform—the human uniform? Then it would be very difficult to keep track of the game. How could the audience know who was winning and who was losing? Yes, the game would be boring, indeed.

The game would be just a bunch of humans running around and interacting with each other. There would be no drama, no winner and no loser. But from here, at the top of the “stadium” it is difficult to differentiate the uniforms. The light uniforms have become so soiled from rolling in the dirt that they are now as dark as the dark uniforms. Some of the audience, those sitting at the base of the stadium, can still distinguish between the light and dark, but most of “them,” who are actually fragments of “you,” can no longer tell the difference; nor do “they” care.

They are bored with watching the game of good and bad. They do not care who wins, because they know that they are ALL on the same team. The constant conflict has become tedious to them, and they are now far more curious about the lights above them.

As you look around the stadium, you see that more and more of the “yous” are tiring of the game and have turned your attention up, towards the lights. How would it feel to BE the lights? More and more of you look up into the lights, whereas only a few are still watching the game. Why, even some of the team members have stopped their eternal competition to look into the lights!

The lights are living magnets. They embrace all of “the yous” with their “feel,” the feeling of FREEDOM. They whisper into your essence, “Wait until everyone is ready to see us. Then we have a surprise for you beyond your imagination!”

You don’t want to wait, but yet you know that you will. You will wait until every fragment of your SELF is ready to release the game. You will use the force of your “waiting” to build an energy field that even your most “lost self” cannot ignore. You will then allow the impetus of this field to build until, not only the entire audience becomes the light, but also the stadium, the parking lot, the earth under the parking lot, in fact—all of it—all the EARTH, all the planet, shall BECOME THE LIGHT.

Then, and only then, will the 3D game be over!

Continue to: Message From Your Oversoul