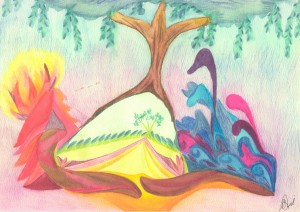 Time is a concept that is relative to our state of consciousness. For example, when we enter our unconscious mind we often find the self we are in our childhood or early adulthood. As we relive these events, we forget our “present time” and plunge ourselves into the past for understanding and healing. Our unconscious mind is also a portal to the fourth dimension. In the fourth dimension, time is experienced very differently than it is in the third dimension. From our fourth dimensional consciousness we can also view our other third and fourth dimensional realities, which are often referred to as “past lives”. However, past, present, and future are terms that only apply while we are engaging in the third dimensional consensus reality of “time”.

Besides being a portal to the fourth dimension, our unconscious mind can also be a portal to the first and second dimensions. If we can calibrate our conscious mind to alpha waves (see Conscious Section), we can activate this portal. Many shaman, mystics, and artists have been able to commune with crystals, which are first dimensional, and plants, animals and other life forms that are second dimensional. While visiting these other dimensions, third dimensional “time” is then forgotten until the multidimensional traveler returns from his or her journey.

The following excerpt from “Visions from Venus, Book II” by Suzan Caroll, best describes the nature of time regarding the third, fourth and fifth dimension:

“Shature, I have felt your approach. Are you ready to resume your studies?” spoke the Guide as Shature entered the Temple.

“Yes, my Guide, I am. I feel different somehow. I feel like I am on the edge of a great transition. I have merged with Lamire, and we have realized some patterns that we must heal. I know that I must heal my pattern of feeling abandoned, followed by my inability to trust, and an anger at the one that I felt abandoned by.”

“Wonderful, my one. I have telepathically received your desire to view the lives in which you have danced the pattern of abandonment. Your desire will activate different third dimensional realities and program them into the dome. The dome will then present a holographic display of one time period at a time. Remember, you are actually entering that time frame and any interaction that you have with its occupants is real and will most assuredly alter their reality.

“You will enter each life at a time when your third dimensional self will soon have to make an important life altering decision. When you make this contact, you can assist him or her in making this transitional decision from love rather than from fear. The choice of love over fear is what will heal your old wounds of abandonment. The vibration of love will remind you that you are never alone and that separation is only an illusion. Love will open the wounded heart to the unity and assistance of the higher worlds. Once the heart is open, it can be healed.

“Since you are now in the fifth dimension where you live within the omnipresence of the ONE, you can view your other realities anywhere along the space-time continuum. In this eternal now, time is perceived as a continuum that can be looked at as if it were spread out upon a table. Upon this table is a large circle that represents the time-space matrix of the third dimension. This large circle is made up of many small circles joined together. Each of these small circles represents a different third dimensional reality.”

“On third dimensional Earth the inhabitants are locked into a space-time matrix and are NOT able to perceive the nature of time from outside their experience of it as we can in the higher dimensions. Therefore, they measure the passage of time with calendars and clocks, live the experience of past, present, and future and are usually unaware of their other third dimensional realities. In fact, they often have great difficulty just staying aware and fully conscious of the reality that they are living at that “time”.”

In the fifth dimension, time does not pass, but you can pass into time. From here in the fifth dimension you can see that all time actually exists simultaneously. You can join with your third and fourth dimensional realities by viewing the holographic image that is displayed in the inter-dimensional dome that you are about to enter. Once you enter this dome, you can view a hologram of that reality to find an appropriate entry point. When you have found that point, you can merge your consciousness with that image. But remember, even though you may enter into any portion of Earth’s space-time matrix, once you are there, you are bound by the progression of time as it is known upon the third dimension.”

Continue to: Expansion of Consciousness