The Seventh Step To Soul 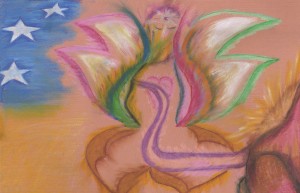 She was very near the top now. The seventh pillar stood just beyond her reach. It had taken her a long time to resume her journey because the sixth pillar had demanded changes in her physical life before she could continue. Now she believed, or at least hoped, that she was ready to approach the seventh and final pillar.

As she stepped onto that last step, and walked towards the pillar, an overwhelming doubt engulfed her. All the old feelings of inadequacy threatened to overwhelm her again. With tremendous will power, she pushed them aside and promised herself that she was ready for this last initiation. A battle raged inside her as confidence and inadequacy were at war. Finally, the confidence won and she moved to look into the seventh crystal.

It was difficult to see anything in the crystal because her attention drifted off whenever she looked into it. When she returned, she could not remember where she had been. This happened time after time until she became exhausted from the effort of trying to stay focused. Strangely enough, when she finally gave up trying, she succeeded. She looked into the crystal on the pillar and, as usual, drifted off. But, as she did so, she managed to stay aware of her experience.

She felt herself lifted up, higher and higher, until the step, the pillar, and all that she had formerly identified as herself ~ were far below. And then, they were all gone. She floated for what seemed a very long time, but it may have been only a moment. It was difficult to determine because time was not as she had always measured it.

She was not alone, however. Many lights that had the “feel” of living beings lovingly surrounded her. These lights flickered in and out of many different forms. When she looked, she found that she too was a light being whose form changed with each thought and emotion. She embraced the companionship of these obviously caring Beings. They surrounded her as if she had returned from a long journey and her family was welcoming her. Within the same moment, many familiar messages entered her consciousness. However, she was able to differentiate each message from the others.

Then she knew. She was HOME at last. She was in the realm of Soul.

The rules of this realm were totally different from those of the physical world. There was no movement, no going from place to place. She was at one place then, as she wished it, she was at another. There was also no cause and effect, no chain of reactions. What was ~ WAS. Its existence sprang instantly from her desire for it. But her desire was not a need. There were no needs because nothing was lacking. If she thought of something, or someplace, or someone, it WAS. When she ceased to think of it ~ it WAS NOT. She was the core of her reality, an island unto herself. On this island there was only the ISNESS, the NOWNESS, and the HERENESS.

She was beyond surviving, fighting, experiencing, and even beyond creating. She was living in complete surrender. Divine Life was the expression of her every breath. She knew that if she allowed her consciousness to fall, she could not remain in this reality. Still, old habitual negative thoughts and feelings called to her from the depths of her memory.

“NO!” she cried. “Just as I have denied myself this reality all of my life, I will now deny myself the indulgence of doubts and fears.”

She knew, though, that she could not remain in this realm yet. Her life mission was not complete. This plane was to be her place of learning and regeneration. Here, she could remember who she truly was and why she had come to Earth. She also knew that, eventually, she would learn to keep a portion of herself awake within this realm. But it would take earth-time before she could keep the thread of consciousness continuous from here all the way down the vibrational path to her physical self.

She determined to accomplish that goal, and with that determination, she felt a pull from her physical world. Fortunately, she knew she could return for she had found the way; she now carried an inner compass.

This compass was a memory, the memory of an essence:
THE ESSENCE OF SOUL.

Continue to: Message From Acea