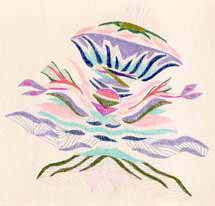 Once upon a time in a far away land, Mother Earth and Father Sky lived happily with all the inhabitants of their kingdom. Their joy could only be improved by the birth of their wonderful daughter, Beauty. At her naming celebration the Fairy Godmothers Wisdom, Power, and Love, came to bless the babe. Each Godmother gave the infant a special gift.
Fairy Godmother Wisdom gave Beauty the gift of a mind that is free of limitation and self-doubt. Fairy Godmother Power gave Beauty the gift of the ability to know and trust her instincts.

However, just before Fairy Godmother Love was to bestow her gift, a dark cloud crossed over the sun and the glorious banquet room became filled with darkness. From the very core of this gloom materialized the forgotten Fairy Godmother, Fear.

It was, of course, easy to forget Fear because no one enjoyed her company. “Good Day,” crackled the harsh voice of Fear. “I see that my invitation did not arrive at my abode. I, however, have eyes and ears throughout your kingdom and have thus learned of this grand celebration. Knowing that you would not purposely exclude me, I have come to give MY gift to the Princess Beauty.”

Everyone in the palace was silenced by terror. The Queen rushed to the infant’s crib, but found that she could not come closer than a few feet from the sleeping child. Fear laughed her wicked laugh. “Does my presence hinder your ability to protect your child?”

The Queen found that she was mute. Everyone, even the three other Fairy Godmothers, was frozen in position. It was as if time had stopped. Only Fairy Godmother Fear could move, and she was quickly advancing on the infant’s crib. The mute Queen gasped in terror. “Do not worry, Dear Queen, I shall not harm your daughter, YET. I only wish to give her my gift.”

“My dear Beauty,” cooed the wicked Godmother, “enjoy your youth, for on your sixteenth birthday, you shall prick your finger on a spinning wheel DIE!”

Fear cackled her evil laugh, spun herself into a vortex of darkness, and disappeared from the great hall. As light came back into the room, everyone awoke from their stupor of terror. The Queen rushed to the now crying infant and held her close to her bosom. “No,” sobbed the Queen. “How can my Beauty die?”

“Wait,” spoke the Fairy Godmother Love. “I have not given my gift to the Princess. Perhaps I can ease Fear’s terrible curse.” The grateful Queen placed the infant back in her crib to receive Love’s blessing. As Godmother Love approached the crib, the infant instantly ceased her crying and starred into the light of Love’s eyes.

“My dear one,” spoke Love. “I cannot change the entire curse of Fear, but I can lessen its severity. When you prick your finger, you shall not die. Instead, Beauty, you will fall into a deep sleep to be awakened only by the kiss of Truth. I command that somehow, dear Beauty, Truth shall find you and bestow upon you Unconditional Love.”

Of course, every spinning wheel in the land was burned to prevent Fear’s evil prediction. However, on the exact day of her sixteenth birthday, Beauty followed her “instincts” up a long narrow stairway without a single “doubt” in her mind and pricked her finger on the awaiting needle. Beauty’s last thought as she fell off into a deep sleep was of how much she had loved her life and how much she would miss it. Sorrow that Fear’s prediction came true was more than the kingdom could bear and the three Fairy Godmothers mercifully put the entire kingdom into a deep sleep until Truth’s arrival.

The story of Mother Earth, Father Sky, and their daughter Beauty quickly spread to the surrounding lands. Following the tale was Fear. The story had, of course, been amplified in the telling. Beauty, along with her entire kingdom, was now believed to be dead. Fear had made sure that this alteration in the tale had taken place.

All who heard this tale ran into their homes and barred their doors against the evil darkness of Fear. All, that is, except one. He was a prince from a distant land and his name was Truth. “I do not believe that Beauty is dead,” he said. “I believe that Beauty is just asleep, and I shall be the one to awaken her!”

Prince Truth had no idea how he could even find the princess, much less awaken her. However, he knew that he was Powerful and had the inherent Wisdom to seize whatever opportunity came his way. Therefore, he decided that he would make the journey to that distant land of Mother Earth and Father Sky. Along the way, he told everyone how he would rescue Beauty. Gradually, the Prince’s great confidence began to ease the hearts of the many that were afraid. These people chose to follow Truth to assist him in his rescue of Beauty.

However, even though many followed Truth to the Castle, few could enter the fearful brambles that now engulfed the entire Castle. In fact, for the final few feet through the brambles, Prince Truth was alone. Worse yet, as Prince Truth cleared the bramble bushes, Fairy Godmother Fear awaited him to fill his mind with images of all he had ever feared. For a moment Truth faltered in the face of his own fear. But then he remembered that Beauty needed him to rescue her, and he fought courageously.

Finally, Truth was victorious over Fear and the Prince banished her from the land forever—he hoped. Now nothing lay between Truth and Beauty. The Prince rushed to her bedside, pulled her into his arms, and gave Beauty a deep, loving kiss.

I would like to say that Beauty instantly responded to Truth’s love and rode off with him on his valiant steed. However, this was not the case. The Princess, as well as her entire kingdom, had been asleep for a very long time. When Beauty first awoke, she did not think of Truth’s kiss. Her first thought upon awakening was of how she had followed her “instincts” into the tower without a shred of “doubt” and touched the very needle that she had been warned against her entire life.

Beauty’s instincts told her that Truth loved her, but she had learned to doubt herself. If she could not trust herself, how could she trust the Prince? After all, she had forced the entire kingdom to suffer a long sleep. How could SHE deserve the love of Truth?

“He must want something from me,” she mused out loud.

“I want nothing, dear Beauty. My love for you is unconditional,” the Prince proclaimed.

Now these questions were very difficult for Prince Truth and he found that he could not find an instant reply.

“You see,” continued Beauty, “This sleep and the brambles that you say you have parted for me, have offered me protection for many years. Why should I release this protection just because you-a total stranger to me-have asked me to? I cannot trust my instincts for they have led me astray before.”

“Dear Beauty, I understand what you say. But I have traveled far to offer you my Love.”

“How can I accept your Love when everyone around me sleeps? How can I abandon all that I have known just because you say there is something better?”

“Come dear Beauty,” spoke Truth, “You and I shall awaken your entire kingdom together. Let us begin with the King and Queen.”

However, before she could be sure, the Princess would need to heal her own self-doubt, so that she could again trust her instincts. After all, everyone had seemed to love her for her entire life, but no one was able to protect her from the curse of Fear.

Truth and Beauty then went throughout the castle awaking everyone from the slumber that had protected them from the pain of Fear’s curse. Many awoke with the same misgivings as the Princess had, and it was many years before the entire kingdom was free from Fear’s curse.

You see, Beauty could not find her own Wisdom, Power, and Love until she had personally confronted her OWN fears. Truth could awaken her, but she could only accept his love when she could love herself.

The moral is, the sleeping child within you may not want to be rescued, at least not at first. Until you are willing to enter the kingdom of your child and awaken each subject from its long, fearful sleep, your child may not accept your “Unconditional Love.”

In other words, if you want your inner child to trust you—you must earn it.

Continue to: The Children