Not “doing it,” but really making love. Tantric sex, without the lessons, sex which flushed its magic up my spine, and his, and promised Goddess Kundalini that, eventually, She would join Her God in the Thousand Petal lotus of the crown chakra.

I had spent a lifetime repressing and “depressing” my emotions. Now I had my first taste of love and my appetite for more was unquenchable.

After being together for a year, we moved to the beach. It was too far away to study with Mrs. Reed, but I did continue to get my written channelings from the Long Island organization. I really don’t think I was very spiritual at that time. I had not yet totally forgiven God, myself, for saying everything would be alright.

In other words, I had not yet learned that I was the creator of my life. It wasn’t until I entered my Ph.D. program, and some very deep therapy, that I was able to gain a degree of mastery over my emotions and release my addiction to being a victim.

Daily, I studied the astrology that I had leaned from Mrs. Reed. I was still a ship without a Captain and I needed to consult astrology, tarot, and psychics as often as I could.

I could not yet believe that I knew all the answers in a higher dimensional component of myself. My consciousness was still primarily limited to the third dimension, although there were frequent pleas, and some visits, to the fourth dimension to seek help.

After establishing my own consulting business as an audiologist, I was struck square that I did not enjoy the work and that I definitely could not spend my whole life doing it. After the divorce, in fact immediately after the divorce, I was married to my new Love.

Now, with a happy marriage, and fulfilling my long time desire of moving to the beach, I could no longer “settle” for a job that was not my heart’s calling. Lady Kundalini had awakened and She could not just “work.” She had to serve from the heart if She were to continue Her upward journey.

Interestingly, the second chakra rules the water element and when my Kundalini moved into the second chakra I moved to live one-half block from the water. Also, it was time now to focus on my children. They had had to survive a crazy mother in deep denial, my going to grad school, an absentee father, a divorce, and a mom and dad who instantly hooked up with someone else after the divorce.

So, did I really focus on my children and give them all my attention? No, at least not directly. I went into a Ph.D. program and, luckily for them, went into intensive psychotherapy. Boy, did I need it! Finally, I was able to hear and heal some of my long repressed pain. I could stop reacting to and start creating my life.

Besides the fact that I had yeast infections, or was it honeymooner’s disease?, for two years, my body faired pretty well. Besides, I was in grad school studying Clinical Psychology and in weekly therapy, so I could release pain from my psyche rather than manifesting it in my body.

My program was very mind-body oriented. My program also helped me align the masculine energy of my analytical mind with the female energy of my inner reflection. This allowed Lady Kundalini to maintain her balance of masculine and feminine polarities as She journeyed through my second chakra.

Interestingly enough, shortly after I had experienced hypnotic regression into my childhood uncovering how I had really felt when my father abandoned me, my yeast infections stopped. My body was saying to me, “Are you sure you can trust him, any him? Maybe, he will abandon you like all the other men in your life.” But the body can’t speak English so it speaks pain.

The pain starts as a whisper, but we bravely carry on like the good troopers that we are. Then, to get our attention, it speaks in a little louder pain, but we are brave. We can endure our suffering courageously.

Then, the body has had it and it yells, “PAIN!” Then we listen. However, too often we listen as the victim and cannot understand the very clear message that the body that you are living in is telling you.

My body was saying, “You/we are afraid. You, meaning the you that lives inside of me/body, are still too frightened to really trust yourself and your loved ones. Furthermore, you still have mountains of repressed anger.” It would take until Kundalini entered my third chakra before I could even begin to understand my anger. However, I did release a lot of it while She was in the second chakra.

FINAL INITIATION FOR THE SECOND CHAKRA

I had reached a psychic plateau and I blamed God, or was it men that I blamed. Or, perhaps I was really angry it at my own masculine self who got the bright idea of going out on “his” own. Anyway, my repressed anger had made me a victim, and the Spiritual Path stops when the traveler cannot take responsibility for the life he/she has created.

When I entered therapy, more and more of my unconscious mind became conscious. Then I became aware of the many “hidden agendas” that were really in control; for example, my getting the MA to “save the marriage.” If I had been conscious of the hidden agenda of leaving the marriage, I would not have fallen into such devastation when the marriage ended.

I would have looked at my divorce as a success and been happy that my education allowed me to get employment even though I would have to re-take my test. But, that was not the case. I had built my life upon illusion, and when the bubble popped, I was devastated.

I stopped pouring over my astrology readings and consulting psychics at every turn and I began to go inside to really listen to my guidance. I connected with both the masculine and feminine aspects of my inner guidance and developed an intimate relationship with them. That is when I began to trust my self and others.

Gradually, and almost unknowingly, I had stepped upon the second step to Soul. 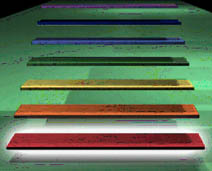 THE SECOND STEP TO SOUL

Tentatively, she stepped onto the second step to Soul. Craning her neck, she peered into the crystal atop the second pillar. But, what she saw was NOTHING. For, within the crystal, was the void and, within the void, was nothing ~ nothing and everything. Within the void the seed of creativity lay nestled deep in the core of possibility. In fact, it was HER center of creativity and HER center of possibility, the possibility of everything, as well as, the possibility of nothing.

She stared deeply into the nothingness and felt a place inside herself resonate to its call. She pulled back in fear and astonishment. Could she be empty, yet full, of creative potential? Could she have a void inside of her? The idea frightened her but also enticed her.

If she looked too deeply into the crystal, would she become lost ~ lost in the crystal and lost in herself? She leaned forward again to look into the crystal. Too late, she felt the connection. The void pulled her into it, or did she leap? Once in the void she could no longer decipher how she had entered.

In the void, all opposite polarities became one, and all that had once been the same, polarized into opposition. Concepts of her mind and experiences of her emotion blurred into a nothingness that was simultaneously peaceful and frightening. Her thoughts could not exist within the void. There was nothing for them to understand or to analyze. Her emotions became so confused that they canceled each other out.

What could she hold on to? What could she understand, feel, know, or question? All experience of familiarity disappeared in an onslaught of ultimate stimulation and complete negation of sensation. Light fell into darkness in the exact moment that it was created. Loneliness and unity danced in and out of reality. She lost all sense of her self ~ the self that once existed before she entered the void.

Life and death, birth and decay, whirled together in harmony to the sweet music of potential. Currents of light and sound flickered in and out of existence and encompassed her with such force that she felt engulfed, enlivened, suffocated and rejuvenated.

It was almost as if the void had spun her out, out into a world that was now foreign to her. Immediately upon leaving the void, all that she had experienced was forgotten. However, the lack of self that existed within the void emerged from it with a virginal perception of reality.

The clouds cleared and the sun was seen in its fullest glory. Blossoms bloomed upon the trees, small flowers began to open, and birds chirped a welcome to the morning as the dew released the scent of eternity.

To survive the void was to die ~ die in order to be reborn ~ then reborn in order to die again and again. Die to each day, to each moment, to each memory, and to each sorrow. Life and death were one. Nothing and everything was one. Forever and never were continuous. The clock ceased to tick. The space was not traveled, yesterday never happened and tomorrow will not come.

In every second, which did not exist as time, she was born again. As eternity collapsed into the NOW she was new. Separation became Unity. Aloneness became Reunion ~ reunion with all and reunion with Self. The flower ceased to exist, but its essence remained.

If only she could remember ~ that which had never happened.

Continue to: The Third Chakra