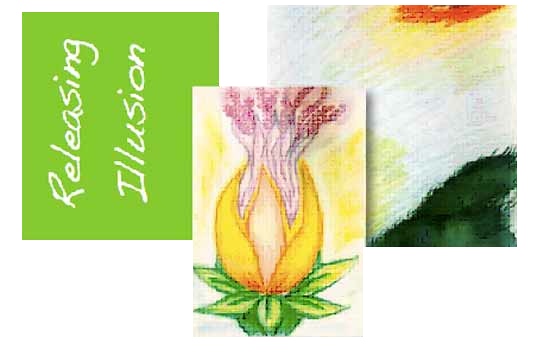 I AM Astrea Moon. I AM a Light Being, just as you shall be. Long ago, I walked the Earth. Upon completing my Mission there, I again became my true Lightbody. After my ascension, I returned to my beloved Venus and Alycone of the Pleiades. For many eons, I have continued to communicate with and serve those still incarnated on my former home, Earth. I am now serving in my form of Astrea Moon, representative of the lunar energy of Collective Consciousness. I have come here to remind you, Beloved Ones, that you, including Gaia and ALL Her inhabitants, are awakening to your true, multidimensional nature. I AM here NOW to assist “those who may hear” in the process of releasing illusion.

An important step in releasing illusion is to identify core beliefs that are the cornerstone of a polarized reality and bind you to the third dimensional matrix. Because you have downloaded and integrated your Multidimensional SELF into your personal and planetary body, you realize that your SELF expands far beyond the small reality of your physical world. Your belief in the separation from your Light Being SELF, and your belief in the illusions of your “human self,” is what has bound you to the matrix of the third dimension.

NOW is a “time” of prophecy, for the 3D Matrix is decaying, and the veils between the third, fourth and fifth dimensions are thinning. In order to hold illusions together there must be emotion, especially fear, and matter. The third dimension is a world of polarities, primarily the polarities of light and dark. The 3D Matrix serves to separate darkness and light, thus creating matter; matter being the darkness, and light being that which keeps the matter alive.

For millennia, since the fall of Atlantis, darkness has reigned. However, as your Solar System is returning to the Galactic Center, the “Cosmic Light” is raising the frequency of Gaia and all her inhabitants. Furthermore, this Cosmic Light is multidimensional and is fused with unconditional love, divine intention and infinite creativity. This Light not only awakens your true, multidimensional nature, but also pulls the third dimensional polarities towards the Center/Fulcrum Point in-between all polarity.

With this re-integration of the polarities of light and dark, Gaia’s 3D Matrix is decaying and Her true multidimensional nature is being revealed. In the polarized third dimension, illusion reigns as the operating system because fearful emotions arise from the illusion that we are separation from our Multidimensional SELF. As you re-integrate the Cosmic Light, this illusion will be replace by the Truth that you are ONE with all life, including your Soul/SELF. Once the illusion upon which the polarized, third dimension is built is released, your transformation in Lightbody will great escalate.

Your process of transformation is much like melting ice. Ice is the lowest frequency of water and steam is the highest. If light is shined on ice, it will eventually return to water. If the frequency of that light rises, it will increase the molecular spin of the water to eventually turn it into steam. The darkness of your planet has kept your earth vessel at a low frequency. However, now, the Flow of cosmic light shining on your Earth is increasing the molecular spin of the cells that make up the matter of all physical form. As you expand your consciousness, you are able to believe in the Light of your Multidimensional Soul/SELF and release the darkness buried in your unconscious ego/self. In this manner, your illusions of polarity begin to “melt” so that you can return to the CENTER of your SELF.

In my ascension life, I served as a Representative of the Goddess in Ancient Greece. Since then, I have continued my service to Gaia until She and All of Her inhabitants could ascend, as well. That time is NOW. Our beloved planetary sister, Venus, will again be instrumental, as She was during the fall of Atlantis, in the evolution of Earth. The Ascended Masters, Angels, Elohim, and our friends and Soul Families from The Pleiades, Sirius, Antares, and Arcturus are among those who are assisting Gaia in Her time of re-birth. On June 8, 2004 our sister, Venus, moved between Gaia and the Sun to expand Love, Beauty and Unity Consciousness on Earth. Venus returns again eight years later, on June 6, 2012, when Gaia will be directly in front of the Galactic Center, so that she may participate in that glorious moment of the NOW.

The increasing Flow of Cosmic Light from the Galactic Center is opening many inter-dimensional portals on your planet and in your Earth Vessel at your Crown Chakra, Opened Third Eye, Heart Chakra and your High Heart. These portals are two-way, descending and ascending. The Portals descending toward the third dimension operate on a mathematical equation that formats the energy of light into a linear timeframe, so that it can appear to be expressed in a finite fashion. You traveled through one of the Descending Portals when you first “logged-on” to the 3D Game, so that your consciousness could be re-calibrated to the linear timeframe of a finite reality.

Every illusion is an element of the third dimensional hologram. A hologram is an illusion created by light traveling at right angles intersecting each other. Many of you first entered the holographic 3D Game to assist Gaia during the fall of Atlantis by adding your great Light to the darkness of the world at that time. You see, in order to maintain the 3D Game, there must be a balance between light and dark. If there is too much darkness, the planet will be destroyed, and the 3D Game ends. On the other hand, if there is too much light, the planet will ascend, and the 3D Game ends.

Dear Earthlings, you are NOW at “Game end,” for it is time for Gaia to ascend. Unfortunately, many have become lost in the Game, returning only to the fourth dimension “in-between” incarnations and then returning again to the Game. On the other hand, many of you have awakened enough during the Game to return to the fifth dimension and beyond in-between your incarnations. It is these awakened ones who are the members of Earth’s Planetary Ascension Game. They have traveled the Ascending Portals before, and bravely chosen to return to Earth to assist both people and planet in returning Home to their true vibration in the fifth dimension and beyond.

Because of Earth’s proximity to the Galactic Center, the greater inflow of Cosmic Light is raising the resonant frequency of the planet, and many are becoming aware of personal and planetary Ascending Portals. In fact, many of you have consciously downloaded and integrated the light of your Multidimensional SELF into your earth vessel. Because of this process, you are awakening from your long sleep in the Land of Illusion to remember the Cosmic Truths that are innate to your true SELF. You are now realizing that what you thought was reality was actually a dream, and what you thought was a dream was, in fact, realty.

In your third dimensional reality you created many veils of illusion and forgot that YOU created them. The reality that is slowly created in the third dimension and quickly created in the fourth, is instantly created in the fifth. Your planet is no longer only third dimensional, as there are many pockets of fourth, and even fifth, dimensional energy. Every thought and feeling of every inhabitant, human and non-human, touches all life to create the collective and planetary reality. Therefore, it is important that you remove your veils of illusion to regain the memory that YOU are the creator of your reality. Choose to release all illusion and live in the Truth of the beautiful reality that is being created NOW.

Find your Ascending Portal and travel through it. Many of you will find the Portal while in your dreams or during deep meditation. We will meet you in the forest near the Crystal Temple on the threshold of the fifth dimension where we can release our illusions – TOGETHER!

Continue to: The Forest